Fall means coffee, cozy socks, warm blankets and BOOKS. Hundreds of pages filled with gorgeous descriptions of love, passion, food, nature and dynamic relationships. If you know me personally, or not at all, you can probably guess that I love to read. In addition to reading, I love to buy books. I have books coming out of every nook and cranny of my home. They can be found in my laundry room, tucked under my bed, decorating my tables and shelves, in my car and in all of my purses and bags.  So when chilly fall rolls around, I look forward to dark, cozy nights finally getting a chance to curl up and read all the books I have prepared for my hibernation. In the coming months, I plan to read the books below. If you are looking for a good book, read one with me! Or, if you have read one already, let me know how it is!

“In 1972, on Mudas Summers’ seventeenth birthday, her beloved Mama, Ella, is found hanging from the rafters of their home. Most people in Peckinpaw, Kentucky, assume that Ella’s no-good husband did the deed. Others think Ella grew tired of his abuse and did it herself. Muddy is determined to find out for sure either way, especially once she finds strange papers hidden amongst her mama’s possessions. But Peckinpaw keeps its secrets buried deep. Muddy’s almost-more-than-friend, Bobby Marshall, knows that better than most. Though he passes for white, one of his ancestors was Frannie Crow, a slave hanged a century ago on nearby Hark Hill Plantation. Adorning the town square is a seat built from Frannie’s gallows. A tribute, a relic–and a caution–it’s known as Liar’s Bench. Now, the answers Muddy seeks soon lead back to Hark Hill, to hatred and corruption that have echoed through the years–and lies she must be brave enough to confront at last.”

“A sweeping, multigenerational drama, set against the backdrop of the raw, roaring New York City during the late 1980s, Ten Thousand Saints triumphantly heralds the arrival a remarkable new writer. Eleanor Henderson  makes a truly stunning debut with a novel that is part coming of age, part coming to terms, immediately joining the ranks of The Emperor’s Children by Claire Messud and Jonathan Lethem’s The Fortress of Solitude. Adoption, teen pregnancy, drugs, hardcore punk rock, the unbridled optimism and reckless stupidity of the young—and old—are all major elements in this heart-aching tale of the son of diehard hippies and his strange odyssey through the extremes of late 20th century youth culture.”

“Eilis Lacey has come of age in small-town Ireland in the hard years following World War Two. When an Irish priest from Brooklyn offers to sponsor Eilis in America, she decides she must go, leaving her fragile mother and her charismatic sister behind. Eilis finds work in a department store on Fulton Street, and when she least expects it, finds love. Tony, who loves the Dodgers and his big Italian family, slowly wins her over with patient charm. But just as Eilis begins to fall in love, devastating news from Ireland threatens the promise of her future.”

Behind the Beautiful Forevers

“Katherine Boo, a bewildering age of global change and inequality is made human through the dramatic story of families striving toward a better life in Annawadi, a makeshift settlement in the shadow of luxury hotels near the Mumbai airport. As India starts to prosper, the residents of Annawadi are electric with hope. Abdul, an enterprising teenager, sees “a fortune beyond counting” in the recyclable garbage that richer people throw away. Meanwhile Asha, a woman of formidable ambition, has identified a shadier route to the middle class. With a little luck, her beautiful daughter, Annawadi’s “most-everything girl,” might become its first female college graduate. And even the poorest children, like the young thief Kalu, feel themselves inching closer to their dreams. But then Abdul is falsely accused in a shocking tragedy; terror and global recession rock the city; and suppressed tensions over religion, caste, sex, power, and economic envy turn brutal. With intelligence, humor, and deep insight into what connects people to one another in an era of tumultuous change, Behind the Beautiful Forevers, based on years of uncompromising reporting, carries the reader headlong into one of the twenty-first century’s hidden worlds—and into the hearts of families impossible to forget.” 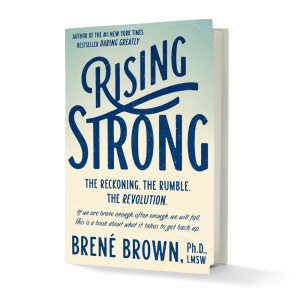 “It is the rise from falling that Brown takes as her subject in Rising Strong. As a grounded theory researcher, Brown has listened as a range of people—from leaders in Fortune 500 companies and the military to artists, couples in long-term relationships, teachers, and parents—shared their stories of being brave, falling, and getting back up. She asked herself, What do these people with strong and loving relationships, leaders nurturing creativity, artists pushing innovation, and clergy walking with people through faith and mystery have in common? The answer was clear: They recognize the power of emotion and they’re not afraid to lean in to discomfort.   Walking into our stories of hurt can feel dangerous. But the process of regaining our footing in the midst of struggle is where our courage is tested and our values are forged. Our stories of struggle can be big ones, like the loss of a job or the end of a relationship, or smaller ones, like a conflict with a friend or colleague. Regardless of magnitude or circumstance, the rising strong process is the same: We reckon with our emotions and get curious about what we’re feeling; we rumble with our stories until we get to a place of truth; and we live this process, every day, until it becomes a practice and creates nothing short of a revolution in our lives. Rising strong after a fall is how we cultivate wholeheartedness. It’s the process, Brown writes, that teaches us the most about who we are.” 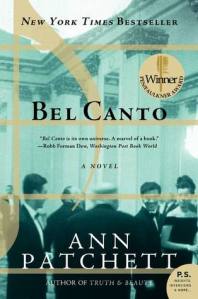 “Ann Pratchett’s award winning, New York Times bestselling Bel Canto balances themes of love and crisis as disparate characters learn that music is their only common language. As in Patchett’s other novels, including Truth & Beauty and The Magician’s Assistant, the author’s lyrical prose and lucid imagination make Bel Canto a captivating story of strength and frailty, love and imprisonment, and an inspiring tale of transcendent romance.”

“A mysterious island.     An abandoned orphanage.     A strange collection of very curious photographs.     It all waits to be discovered in Miss Peregrine’s Home for Peculiar Children, an unforgettable novel that mixes fiction and photography in a thrilling reading experience. As our story opens, a horrific family tragedy sets sixteen-year-old Jacob journeying to a remote island off the coast of Wales, where he discovers the crumbling ruins of Miss Peregrine’s Home for Peculiar Children. As Jacob explores its abandoned bedrooms and hallways, it becomes clear that the children were more than just peculiar. They may have been dangerous. They may have been quarantined on a deserted island for good reason. And somehow—impossible though it seems—they may still be alive.   A spine-tingling fantasy illustrated with haunting vintage photography, Miss Peregrine’s Home for Peculiar Children will delight adults, teens, and anyone who relishes an adventure in the shadows.”

The Life We Bury

“College student Joe Talbert has the modest goal of completing a writing assignment for an English class. His task is to interview a stranger and write a brief biography of the person. With deadlines looming, Joe heads to a nearby nursing home to find a willing subject. There he meets Carl Iverson, and soon nothing in Joe’s life is ever the same.

Carl is a dying Vietnam veteran–and a convicted murderer. With only a few months to live, he has been medically paroled to a nursing home, after spending thirty years in prison for the crimes of rape and murder.

As Joe writes about Carl’s life, especially Carl’s valor in Vietnam, he cannot reconcile the heroism of the soldier with the despicable acts of the convict. Joe, along with his skeptical female neighbor, throws himself into uncovering the truth, but he is hamstrung in his efforts by having to deal with his dangerously dysfunctional mother, the guilt of leaving his autistic brother vulnerable, and a haunting childhood memory.

Thread by thread, Joe unravels the tapestry of Carl’s conviction. But as he and Lila dig deeper into the circumstances of the crime, the stakes grow higher. Will Joe discover the truth before it’s too late to escape the fallout?”